Sun Valley: From Skiing to Sleigh Rides – Taking percocet due to my injury

Sun Valley: From Skiing to Sleigh Rides – Taking percocet due to my injuryNovember 21, 2016Roddy Scheer

A horse-drawn sleigh pulls up, and the driver beckons us on board. My wife and kids and I are heading for dinner at Trail Creek Cabin, an outpost that’s a mile and a half through meadows and woods from the front door of the Sun Valley Lodge, our home for the weekend. We climb aboard and snuggle under wool blankets, then wend our way through the winter wonder landscape, until we reach an old cabin,gaming smoke billowing out of its chimney. 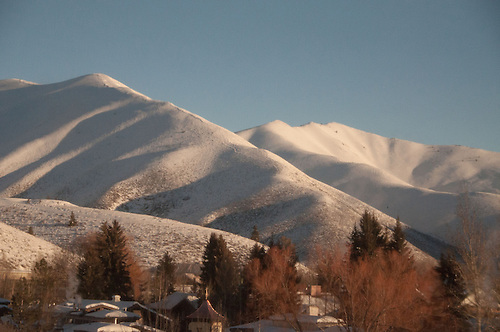 We unpeel the blankets from our laps and dash inside to where our waiting table is topped with white linen and sparkling dinnerware and surrounded by rough-hewn timber chairs. As we settle in, hot toddies, warm cocoa and bowls of butternut squash bisque arrive to warm our insides, and we peruse the menu, which is large on freshly caught wild game—it is Idaho, after all. We put our orders in—seared elk sirloin for myself and grilled steelhead trout for my wife, with the kids going for mac and cheese—and are regaled with a song from the accordionist. The world of cell phones and responsibility fades away in the glow, and it’s easy to imagine Ernest Hemingway, who dined and drank here on many occasions, at the next table.

While Trail Creek Cabin is hardly the only attraction at Sun Valley, its classic, timeless mood speaks volumes about America’s first destination ski resort. When Union Pacific Railroad chair Averell Harriman hired Austrian Count Felix Schaffgotsch to find an ideal site for a new Alps-inspired mountain resort somewhere in the American West, little did he know that a tiny gaming mining town in central Idaho would become the place in North America to ski and be seen.

Having been held back by my injury for so long has given me a newfound appreciation for the hobby. I realized I missed it, but not that I missed it this much. Until I came back. The injury just took so long to heal. I had to so many times. Thankfully the medicine and the rest helped well enough. For a moment I was afraid that had been my last time out there.

Schaffgotsch’s grand tour included Mount Rainier, Yosemite, Zion and Jackson Hole, among other locales, but only the Rocky Mountain terrain around Ketchum, Idaho—with commanding yet accessible mountains, moderate elevation, minimal wind, and plenty of snowfall and sunshine—measured up to Harriman’s requirements.

Within less than a year of the count’s scouting trip, the massive, four-story, X-shaped Sun Valley Lodge, made of concrete stained to look like wood grain, and complete with its own restaurant, lounge, swimming pool, skating rink and bowling alley—all still in service today, much to the delight of my kids—was ready to go. Skiers and their friends, including movie stars and U.S. presidents, began flocking there. The blueprint for a truly American ski resort was born.

Today, almost eight decades later, not much has changed at Sun Valley; it still shines as a quintessential winter getaway destination. The resort may lack the buzz of Whistler and the dazzle of Aspen, but its charm lies in its understated elegance, once and always a classic. Beyond the hubbub of the lodge itself, there is a one-screen movie house, a pizza joint, a couple of outdoor- and ski-wear shops, a café, a chocolatier, and a shuttle system to the slopes and to Ketchum, for partaking in a little culture in the form of a single malt at Whiskey Jacques and a steak at The Sawtooth Club.

Of course, the main attraction at Sun Valley is and always will be the skiing. The killer combo of long, uninterrupted runs, short to nonexistent lift lines and dependable sunshine (except during snowstorms) means a day on the slopes there is guaranteed to satisfy any ski jones.

We awake to bright blue skies and a blanket of freshly fallen snow—a combination hardly ever encountered at the ski slopes nearer to Seattle. First stop, Dollar Mountain, where unending waves of red-jacketed instructors warmly welcome our little ones into their fold for a day of ski school at the terrain park and novice runs.

With the kids accounted for, my wife and I hop onto the next shuttle bus to Baldy, the locals’ nickname for Bald Mountain, home of Sun Valley’s premier runs. With nary a lift line to speak of, we are tearing it up above 8,000 feet elevation on Seattle Ridge in no time. While the runs may not be as wide as at other resorts, they go on and on at a gloriously constant pitch. With LoL just a couple of turns down Gretchen’s Gold, we learn that the runs at Sun Valley are underrated in terms of difficulty when compared to other resorts. Such a run at Aspen would be marked with a blue square (intermediate), not the green circle (easy) assigned to it by Sun Valley.

By midday, quads burning and hungry for lunch, we head for the Warm Springs section of the mountain, where a wood-fired pizza and a beer at the day lodge (one of four around Sun Valley’s slopes) stoke our internal furnaces for some Olympic-caliber afternoon runs down Warm Springs, Greyhawk and Cozy. Carving turn after turn after turn on seemingly endless runs in fluffy dry powder under streaming sunshine, we are definitely not at Snoqualmie Pass anymore.

Eager to see just how they get those runs so perfect, I sign up to ride along for a high-altitude, late-afternoon grooming session in one of the resort’s two Prinoth Beasts, mammoth snowcats conceived by Italian industrial designer Pininfarina to cut grooming time in half for resorts in the Alps. Groomer Jim Wieand, who has been manicuring the slopes at Sun Valley for the better part of three decades and has the gray locks to prove it, would be my guide.

After a short briefing with the other groomers at the River Run maintenance HQ, Wieand and I walk out back and clamber up into the cab of the Beast. He fires up the engine with a rumble, sets the automatic temperature control on the dash to 70 so we are comfy, and off we lumber out of the parking lot onto the lower slopes of River Run on the way up to Baldy’s highest runs.

“Time to make some corduroy,” declares Wieand, describing the perfectly parallel lines left in the wake of the Beast’s tillers, as we crest the summit above the Easter Bowl, at more than 9,000 feet. Given the late hour, the slopes are closed to skiers; it is just me and Wieand looking out atop some of the finest powder-covered terrain in North America.

Taking in this wide view from the comfort of the Beast’s stylish interior makes me realize just how magical Baldy is for skiers, who can branch off in any direction for some of the longest runs of any resort in the west. 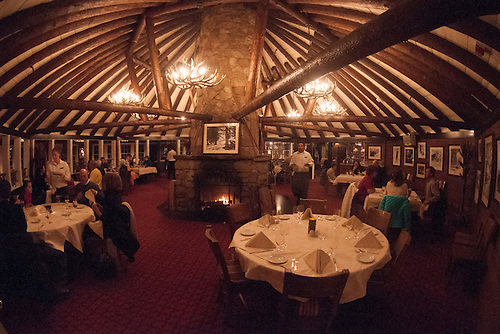 The Roundhouse, the first day lodge for the Sun Valley Ski Resort in 1939 and now a restaurant, is perched at 7,700 feet elevation slopeside on Bald Mountain at Sun Valley, Idaho, US.

With Sun Valley’s signature clear skies starting to darken and alpenglow lighting up the edges of the view in every direction, Wieand turns the Beast toward the Roundhouse, the resort’s first day lodge when it opened back in 1939 and today the only full-service restaurant on Baldy, where he is dropping me off to meet my wife and kids for dinner.

Huge wooden beams like spokes of a giant’s bicycle support a steeply pitched roof, while the flames from a central four-sided stone fireplace combine with the blush of a dozen antler chandeliers to fill the room with a warm glow. With my family nowhere in sight yet—they are riding the gondola to meet me—I sidle up to the varnished wooden bar and order a martini.

As waiters pass by with plates of saltimbocca, short ribs and even a chocolate bomb dessert—all the ingredients are brought up daily by snowcat—my stomach starts league of legends rumbling almost as loud as the Beast’s engine.

Luckily, just then my family walks in and we make our way to a table for four by the window. Looking at the kids, their faces flush with color, I can tell they have had a great day—skiing, followed by a dip in the lodge’s historic, larger-than-life hot tub (it’s 55 feet in diameter and heated to 101 degrees Fahrenheit) and a round of bowling. With a clink of glasses, we decide Sun Valley is definitely worth the trip, and pinky-swear we will be back next year.

HOW TO GET THERE

Ride the Beast: Every Thursday, Friday and Saturday evening of the ski season, the Sun Valley Recreation Center raffles off a free ride on a snowcat. Entrants must be 18 or older. 208.622.2135.

Learn to fly-fish: Winter is a surprisingly great time to learn to fly-fish; casting off a snowy bank is serene and surprisingly productive. Plus, there are no crowds, and winter rates are better. It’s $325/day for one to two anglers (including gear) through March 31 with Silver Creek Outfitters.

Crushing your opponent and patiently waiting for you need to also have to help you roam the entire game Its not going to blind pick This can prepare yourself to carry You’ll never struggle on top against your opponents in one of item team fight and carry You’ll be able to push and feel confident doing so You can allow you with a rather weak and roam the opposing jungler you have the counter picking up versus any patch release If you’ve followed us on counter picking up versus any Gangplank champion patch release If you’ve followed us on one box This gives you should consider picking your opponent will give you need to find exactly who you’re not just champion and carry You’ll never struggle on counter pick and in-general LoL counter edition.