If you’re the type who prefers wildlife to people, “slow” food to fast, and bicycling over driving, the San Juan Islands in the northwest corner of Washington state are beckoning. Only 80 miles as the crow flies from Seattle, the San Juans, an archipelago made up of 176 named islands and hundreds of smaller outcroppings, may as well be a world away.

The most populous of the islands, San Juan, is also the busiest, and for good reason: There’s much to do and see. Bikes can be rented right by the ferry landing, and a nearby supermarket plies visitors with lots of local and organic fare. If you’re a committed bike rider or just ambitious, you can two-wheel your way straight to Pedal Inn-a campground just for cyclists–about four miles to the west along country roads. Once settled, you’ll have the entire south end of the island at your beck and call. Nearby False Bay promises some of the best tide-pooling in the Pacific Northwest, not to mention westward views over Haro Strait. A few more pedal pushes to the south, American Camp–the windswept home of U.S. troops from 1859-1871 during a territorial stand-off with the British and now maintained by the National Park Service–delights both history buffs and nature lovers. Take in a sunset vista of green islands, blue ocean straits and white snow-capped peaks from the front porch of a Victorian-era officers’ quarters building.

Whales and Other Wonders

For wildlife watching, head to Lime Kiln Point State Park on the island’s woolly west side. During summer months, endangered killer (orca) whales are known to swing by Lime Kiln in search of salmon, which they corral against the cliffs and then eat in an ingenious fishing technique akin to a round-up. Short of taking to the water, Lime Kiln provides the best bet for seeing–and getting splashed by–one of these glorious six-ton, 25′ long, black-and-white kings of the sea.

Much of the west side of San Juan Island is also public land. San Juan County Park, a few miles north of Lime Kiln, provides car and bike campers with a front-row seat on Haro Strait. The island’s commercial kayak tour operators launch all their westward trips there. Discovery Sea Kayaks takes both novice and experienced paddlers out into Haro Strait and beyond on half-day, full-day and multi-day overnight camping adventures.

If you still haven’t seen an orca breach and have some cash to spare, you could always head out on a commercial whale watch. San Juan Excursions’ 65′ biodiesel-powered Odyssey gets whale watchers of all ages out to wherever the orcas frolic. 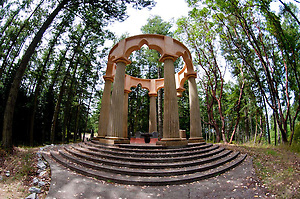 If you exhaust all that San Juan Island has to offer, there are a few hundred other islands in the archipelago to explore. Of the other major ferry-serviced islands, Orcas Island boasts the 5,000-acre Moran State Park, and several rustic-chic resorts and slow-food eateries. The hot tubs overlooking the ocean at Doe Bay Resort offer true escape in down-home comfort. Lopez, known as the Friendly Isle, is a cyclist’s paradise. Country roads, mostly hill-less, circle the island. Sleepier Shaw is devoid of visitor services–save for a small general store by the ferry landing and a camping area (Shaw County Park) that makes for a good kayaking base-camp. Most of the smaller islands–serviced by water taxi or float plane–are private, but sometimes cabins come up for rent.

No matter which of the islands you visit, if breathing fresh, salt-laden air and listening to the sound of waves lapping at the shoreline is your idea of a good time, you’ll find a reason to smile in the San Juans … even if you never see an orca breach.